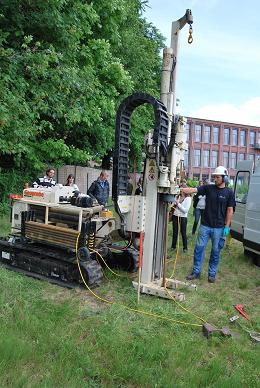 Classic sampling techniques have their limitations for the detection and characterisation of pollution with chlorinated solvents. This type of pollution spreads heterogeneously in the subsoil and the components are very volatile. This makes it hard to produce a reliable and complete description of the pollution. There are several new techniques on the market, but these have not yet been widely applied.

The pilot project aims at new techniques for the detection and characterisation of pollution with chlorinated solvents. Two techniques are demonstrated and validated on the site by comparing the results with 'classic' techniques. The first technique is the EnISSA-MIP, which is a combination of MIP (Membrane Interface Probe) and GCMS (Gas chromatography-mass spectrometry), allowing for on-site component-specific detection. The second technique is the RNS (Ribbon NAPL Sampler), which uses an impregnated liner to detect NAPL (Non-Aqueous-Phase-Liquid) in-situ.

The pilot project is performed on the site of a former spinning and weaving mill. Pollution with chlorinated solvents originating from three sources has spread over a distance of more than 100 m. In a vertical direction, the pollution has spread to a clay layer at 20 m below surface level. Groundwater samples indicated that zones with DNAPL may be present on the site.