The RijnWaalpad, the 17 kilometre-long fast cycle route between Arnhem and Nijmegen, is intended to offer an alternative for car travel along this route. The project was undertaken by national and provincial government, the city region authorities and the local municipalities, as well as educational institutions and large employers located close to the route.

The fast cycle route between Arnhem and Nijmegen, also known as the RijnWaalpad, has officially been in use since July 2015. The route joins together the two large cities and the intervening smaller towns and villages over a distance of 17 kilometres. Along the route, infrastructure adaptations have been made to provide a high-quality fast cycle route, including the construction of two tunnels and the grass-green cycle bridge ’t Groentje. The construction of the RijnWaalpad cost 17 million euros and was financed by a combined investment from national government (via Fiets Filevrij), the Province of Gelderland and the adjacent municipalities.

In developing the RijnWaalpad, as well as building the infrastructure itself, active efforts were made in respect of marketing, communication and innovation. In the planning phase, a competition was announced to come up with a name for the fast cycle route, among residents of the adjacent municipalities. The aim of this competition was to boost awareness of the fast cycle route among local residents. And the ‘Bicycle Buddy’ app was also developed. This allows cyclists to navigate along the route, and earn trophies for good behaviour. They can even have an influence on the colours of a work of light art in one of the bicycle tunnels on the RijnWaalpad.

A behaviour programme was also developed for the RijnWaalpad. This focused heavily on engaging with car drivers who used the most important traffic corridors between Arnhem and Nijmegen during rush hour periods. This made use of a second app: Toury. In this app, users could log the times they avoided rush-hour journeys and in that way save for a financial reward.

Finally, the local municipalities also involved local employers in the scheme, to further boost use of the fast cycle route. 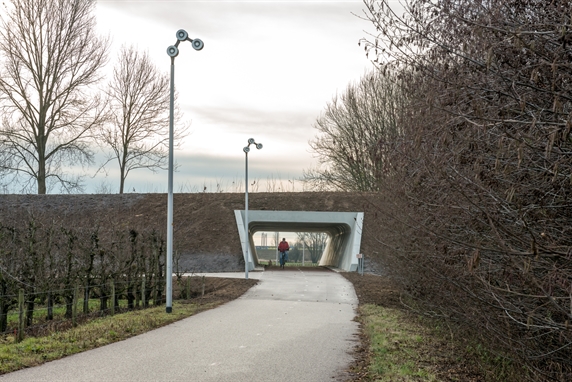 In 2010, the maximum speed on part of the N325 trunk road between Nijmegen and Arnhem was reduced to 50 km/h. While roadworks were carried out, the idea was born to introduce a good-quality alternative for car use between the two cities. The aim was to help reduce congestion on the road. This led to the plan for the RijnWaalpad, which tied in well with the policy objectives of the Province of Gelderland and the Arnhem-Nijmegen city region. So the project, from plan to official opening of the route, took a total of around 5 years.

In realising and promoting the RijnWaalpad, many parties worked together. In addition to national government, the Province of Gelderland, the Arnhem-Nijmegen city region and adjacent municipalities, interest groups were also involved in the development process. For the construction of bridges and tunnels, collaboration was sought with Rijkswaterstaat and Prorail, and the national signposting service was called in for the signage. Key user groups, such as educational institutions and large employers, were also asked to assist in promoting the route.

The development of the RijnWaalpad coincided with work on the motorways between Arnhem and Nijmegen. As a result of the roadworks, use of the road became less attractive; the RijnWaalpad offered a useful alternative. In promoting the use of bicycles, ties were also constantly sought with local employers who on their own initiative encouraged alternatives to car use.

Every year, at various points along the route, measurements are made of the number of bicycle users. A user survey was also carried out in the form of an on-line questionnaire.

The user survey reveals that just 13% of respondents is unaware of what the RijnWaalpad is. In addition, it seems that attention for the route in the media has led to many respondents to cycle more frequently. Furthermore, the mark that users would award the new route is quite a bit higher than that for the old route.

For more information on the effects of improved cycling infrastructure, not least in terms of accessibility, please consult the fact sheet Cycling Infrastructure.

The fast cycle route measures can be deployed in a wider context in the Netherlands: indeed, many regions are currently working on similar projects. Considerations from the Rijnwaalpad project are: 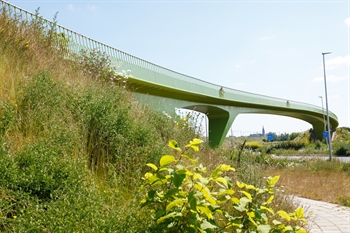